1. Best Book of 2010
Enchanted Ivy by Sarah Beth Durst was the book I enjoyed reading the most this year. I'm normally not the biggest fan of fantasy, but this novel was riveting and well-written enough to really suck me in.

2. Worst Book of 2010
Hmm...I wouldn't say I have a worst book. There were some books that didn't work for me, but nothing so bad.
3. Most Disappointing Book of 2010
I was really let down by Lisa Mantchev's Perchance to Dream. The first book in the series, Eyes Like Stars, was so beautiful and enchanting, but I spent the majority of its sequel confused and irritated.

4. Most Surprising Book of 2010
Hearts at Stake by Alyxandra Harvey. I was expecting
cheesy romance and a stereotypical vampire plot, but it was so different from anything I imagined. One of my favorites of this year, actually!

5. Book You Recommended Most to People in 2010
Vixen by Jillian Larkin--how could you not love the sparkling glamour of 1920's Chicago? I can't wait to read the next book in the series.
6. Best Series Discovered in 2010
Well, The Drake Chronicles by Alyxandra Harvey was my favorite new series of 2010, but I also started reading the Pretty Little Liars series by Sara Shepard, and I'm totally addicted.

7. Favorite New Author of 2010
Too many to count! :)
8. Most Hilarious Read of 2010
Princess for Hire by Lindsey Leavitt was really cute, well-done, and witty.

9. Most Thrilling Unputdownable Book of 2010
Well, it technically came out in 2009, but I was literally glued to Lauren Kate's Fallen for three days straight.
10. Book You Anticipated the Most for 2010

I was super excited (read: book-stalked) about Hex Hall by Rachel Hawkins and Forgive My Fins by Tera Lynn Childs (one of my favorite authors) for months before either book came out. They didn't disappoint!

11. Favorite Cover of a Book You Read in 2010
The Cinderella Society by Kay Cassidy has such an adorable, girly cover. What can I say--I'm a sucker for shoes...
12. Most Memorable Character in 2010

I loved Lucy from Hearts at Stake and Blood Feud by Alyxandra Harvey. She was spunky and had a great attitude and sense of humor!
13. Most Beautifully Written
Book in 2010
Even though I didn't love it, Lisa Mantchev's Perchance to Dream was like beautiful, descriptive poetry.

14. Book That Had the Greatest Impact on You in 2010
Once again, not a book written in 2010, but still inspiring: The Secret Life of Bees by Sue Monk Kidd. I took it with me on a trip to Seattle, and I'll never forget the weird looks I got from people on the plane while I sobbed my eyes out.

15. Book You Can't Believe You Waited Until 2010 to Finally Read
The Pretty Little Liars series by Sara Shepard and Angus, Thongs, and Full-Frontal Snogging by Louise Rennison. Thank you, summer vacation!
----------------
Look for my "2011 Releases I'm Dying to Read!" post coming this week...And until then, thank you to all readers, publishers, and authors for making 2010 so fabulous. Let's hope 2011 is just as great!
Posted by Bookworm at 10:34 AM 3 comments:

Author: Jennifer Solow
Pages: 211
Published: 2010, Sourcebooks Jabberwocky
Genre: Middle-grade fiction
Cover Score: D
Overall Grade: A-
Parker Bell and her three best friends have been waiting for the start of their eighth grade year for their entire middle school career. This year, Parker and her friends have made it to the top of the populadder at their exclusive private school, Wallingford Academy. Their Facebook friend count has never been higher, and as Aristobrats (or Wallingford legacies), they've been groomed to lead the school to greatness. But when the girls are assigned to produce the lame, losers-only school webcast, their hard-worked-for popularity plummets. Will this tragedy destroy everything they've worked for? Or their friendship? Or both?
My thoughts: Before picking up The Aristobrats, I was expecting just your typical mean-girls novel, a la The Clique. However, The Aristobrats had something that the Clique and other books in the same genre lack. The popular girls are actually--gasp--friendly, and Ms. Solow actually projects some surprisingly good morals into her story, including the value of friendship and the real way to get to popularity.
The Aristobrats still has the same humor, label-dropping (though not as obnoxious as in The Clique) and attitude as similar books in the genre, but it also presents readers with four strong protagonists who have good ethics and are thoroughly relatable: how refreshing. My one complaint would have to be the cheesy cover--it doesn't do the book justice!
While The Aristobrats starts off a bit slowly, Ms. Solow has a strong, appealing writing style that sucks the reader into the quick-moving story. I definitely recommend this book to middle-school girls who want a bit of glitz and glam embedded in an overall fresh and lively quality read.
Posted by Bookworm at 11:31 AM 3 comments: 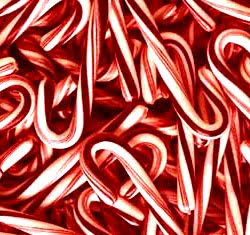 Merry Christmas, Happy Hanukkah, and Happy Kwanzaa! Whatever you celebrate, I just wanted to take the time to thank each follower and reader, and wish a happy, healthy, and safe New Year to all! Look for my "Best of 2010" post coming soon, where I will highlight the top reads of this year. I'm sitting here in a snuggly new cashmere sweater and some great new books to look forward to--life's good? :)
PS. If you're in the holiday spirit of gift-giving and receiving, I'm giving away 9 holiday-themed new releases here, and a copy of the smashing new YA novel Vixen by Jillian Larkin here! Enter to win!
Posted by Bookworm at 8:01 PM No comments:

Win A Copy of Vixen!

Here's your chance to win a copy of Jillian Larkin's new novel Vixen! Full of 1920's mystery, intrigue, and romance, Vixen was one of my favorite books of 2010 (check out my review here!)
You must be a follower to enter (and if you're not, it's super easy--check out my sidebar and click "follow"!). To enter, simply comment below with your name and email address. A winner will be selected on January 15, 2011. US entries only, please! Good luck! 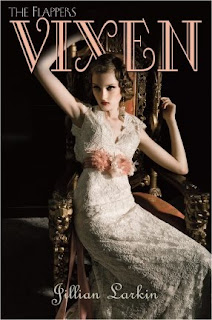 PS. Also check out the Mega Holiday Contest here--I'm giving away 9 books total. Enter before January 10 to win a wintery prize pack!
Posted by Bookworm at 10:30 AM 14 comments:

Author: Jessica Brody
Pages: 258
Published: Farrar Straus Giroux, 2010
Genre: Contemporary fiction
Cover Score: B
Overall Grade: B
Madison Kasparkova always thought she understood how Karma worked: good deeds are rewarded, and bad deeds are punished. So when Maddy catches her boyfriend of two years cheating on her with perfect Heather Campbell, Maddy decides that she can't wait for Karma to balance the universe and exact revenge on Mason Brooks. He deserves punishment, now. That's when Maddy and her best friends decide to form the Karma Club--a secret organization whose sole purpose is to clean up the messes the universe is leaving behind. By righting the wrongs of former exes and getting payback on mean girls, the girls of the Karma Club believe that they're doing the right thing--they're watching out for each other. But what the girls don't realize is that it isn't wise to meddle with the universe. Because once you mess with Karma, it messes back...Now Maddy must find a way to balance her life for good, as she's created an even bigger mess for herself.
My thoughts: I really liked the concept for The Karma Club. It was fresh, it was fun, it was unique. However, the book fell a bit flat for me in certain areas.
The best part of this book, for me, was when the girls put their plans into action. Their revenge plans were funny and clever, but I wish there were more moments like these! Most of the book was Maddy's internal monologue, and frankly, it got boring after a while. I wanted more action and a faster plot. The story seemed to move slowly, and by the end of the book, I just wanted it to be over already. It took too long to get to the point.
I did love the members of the club, though. Jade, Angie, and Maddy were all hilarious and relatable, which makes this book perfect for teenage girls!
The Karma Club put some good points out there, and I really enjoyed the useful, sincere information about harmony and Karma. Ms. Brody clearly did her research! While a bit slow and quite predictable, The Karma Club is still an entertaining read--maybe just wait until it comes out in paperback.
PS. Watch the awesome trailer here!
Posted by Bookworm at 9:29 AM 1 comment:

Here's my gift to you this holiday season! I'm hosting a super-duper holiday giveaway! There will be 3 lucky winners, who will each receive one of the wintery prize packs below: 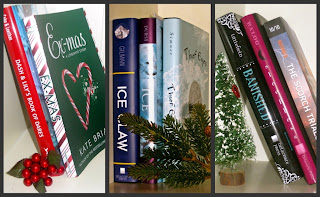 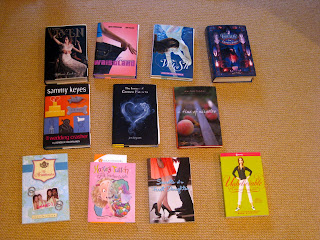 Have a great week--5 more days of finals and school, and then I'm freeee!
Posted by Bookworm at 6:46 PM 1 comment:

Author: Jillian Larkin
Pages: 421
Published: December 14, 2010
Genre: Historical fiction/Romance/Mystery
Cover Score: A
Overall Grade: A+
Welcome to 1920's Chicago, where anything goes....
Seventeen year old Gloria Carmody wants what she can't have, the flapper lifestyle: sneaking into underground clubs, dancing the night away...However, she's engaged to Sebastian Grey, one of the most powerful businessmen in Chicago. Now, her carefree party days are over before they've even started...or are they?
Meanwhile, Gloria's squeaky-clean country-mouse cousin Clara Knowles has come to Chicago to help prepare for the wedding, but looks can be deceiving. Clara's got some dirty little secrets in her past that she'd love to put behind her. But in a dangerous, thrilling city like Chicago, they just might pop up again...
Lorraine Dyer, Gloria's envious, social-climbing best friend, is tired of living in Gloria's shadow. Lorraine's ready to make a splash for herself, and she won't let anyone stand in her way. Someone is going to be very sorry....
My thoughts: I can't stress how much I enjoyed the first book in this smashing new series. Vixen was captivating, dangerous, sexy, and beautifully written. First, I loved the characters in the novel.
The alternating chapters helped me get into each character's head. I could feel Gloria's stress regarding her upcoming forced marriage, Clara's desperation not to fall in love again, and Lorraine's spite towards her "perfect" best friend. Ms. Larkin did a superb job at capturing 1920's society in the pages of her book. I could imagine Chicago perfectly in my head, and each little description of Chicago's wealthy, beautiful young adults made me want to hop in the book and stay there amidst all the danger and romance.
Ms. Larkin's writing style is easy to get in to, and the book whizzed by for me. The mystery aspect was easy to follow, the romance was swoonworth, and the descriptions of everything were simply beautiful. I loved the glamorous, secretive world of underground speakeasies, Mob bosses, and glittering flapper dresses that she created. I loved 1920's fashion, so this book was perfect for me.
In short, I can't recommend Vixen enough. If you're looking for a "totally jake" read, here's your best bet. I can't wait to read the next book, Ingenue, coming out next year!
Posted by Bookworm at 9:31 AM 2 comments:

I adore this trailer--it's glamorous, it's mysterious, it's well-made...I'm almost done with the book (Releasing December 14, so be prepared to make a bookstore run) and I'm loving it! Expect my review and a Vixen giveaway in the next few days!
Posted by Bookworm at 5:49 PM No comments: