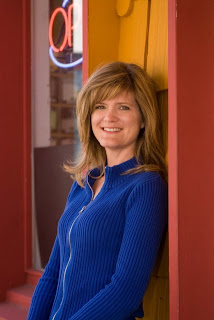 Thanks to Suzanne, the author of newly-released Mad Love, as well as fellow YA reads Saving Juliet and Coffeehouse Angel! Welcome, Suzanne, and congratulations on the new book!
Bookworm: What inspired you to write Mad Love?
Suzanne: I have long loved Greek and Roman mythology. In Coffeehouse Angel I reimagined the Greek messenger god, Hermes. And in my first adult book, Daughters of Crete, I reimagined the story of Ariadne. I knew I wanted to do something with Cupid. So I thought about it for a while. The story took shape over many intense revisions.
Bookworm: Bipolar disorder plays a large role in the novel. How did you research this topic?
Suzanne: I read about it. But I also drew from my own childhood. My father struggled with manic episodes, and he also struggled with anxiety and depression, for which he self-medicated with alcohol. He was never diagnosed bi-polar but I'm guessing he would have been if he'd ever sought help.
Bookworm: Do you believe in Cupid?
Suzanne: Cupid is the God of passionate love, the kind of love that hits you real hard and fries your brain for a month or two. I've experienced it firsthand. Who hasn't?

Bookworm: If you were a cheesy romance-novel writer, like Alice's mom in the book, what would your first book be named?
Suzanne: Well, I have this thing about the Scottish highlands and men in kilts to it would be something like Hung in the Highlands. :)
Bookworm: What was your favorite part of the book to write?
Suzanne: The ending!
Bookworm: Which character is most like you, and why?
Suzanne: I guess I most relate to the mother character, Belinda Amorous, simply because she's a working writer with a teen daughter.
Bookworm: What is your next writing project?
Suzanne: I'm busy with my next teen novel, which will be released in 2012 if I can ever finish the thing. And my next middle grade novel, Smells Like Treasure, comes out in May 2011.
Bookworm: What are your writing essentials (environment, music, snacks, etc)?
Suzanne: I need something hot to drink, usually it's a nonfat latte, sometimes it's Earl Gray tea. I like white noise so I usually work in a coffeehouse.
--------------------
To learn more about Suzanne's other books and to view Mad Love's awesome book trailer, visit her website here!
Thanks, Suznne--we can't wait to see what's next for you!
Posted by Bookworm at 9:11 AM 2 comments:

Author: Suzanne Selfors
Pages: 325
Published: Walker & Company, 2011
Genre: Contemporary fiction/Fantasy/Romance
Cover Score: C-
Overall Grade: A
As the daughter of the bestselling Queen of Romance, life for sixteen-year-old Alice Amorous should be pretty sweet. But ever since her mother was secretly hospitalized for mental illness, Alice has been forced to maintain a brave front--living alone; lying to her new crush Tony; forging her mother's signature; answering fan letters; telling the publisher that all is well and the Queen's next book is on its way. Now time is running out, and so is their money. The next book is overdue and the Queen can't write it. Alice needs to deliver a new novel for her mother--and she needs to come up with one fast. That's when she meets Errol, a strange guy claiming to be Cupid, who insists that Alice must write about his tragic romance with Psyche--the greatest love story of all time. Alice needs the story, but can she trust Errol? After all, she doesn't believe in Cupid...
My thoughts: I'm a huge fan of Suzanne Selfors, so I was thrilled to read her latest book. Luckily, I loved it just as much as her previous books--if not more. The thing that made Mad Love such a winner to me was its amazing, hilarious, diverse cast of characters.
I loved all of the characters, from Alice herself to the crazy neighbors that share her Seattle apartment complex: Ms. Selfors clearly spent time crafting each unique personality to perfection. The characters created a fresh, 3 dimensional sort of family unit in the novel, and I felt like the characters were the type of people I'd encounter in real life: lovable, quirky, realistic, funny, and often frustrating.
As well, I appreciated all of the smaller subplots woven into the main storyline, creating depth: Alice's crush on Tony, Alice and Errol's story, Alice's family drama, Alice's neighborhood life. I also appreciated Ms. Selfor's research skills. The facts she included on Alice's mother's bipolar disorder helped build the plot and made me sympathize towards Alice--Ms. Selfors has an ability to evoke emotion in her readers. The plot moved quickly and fluidly, making for an easy read whose pages I couldn't stop turning. In Mad Love, I experienced the mark of a truly good book: while reading, I felt like I was submerged in the plot itself, like I was Alice, experiencing the events firsthand.
A funny, light, bittersweet novel that is fresh and unique, Mad Love gives you that warm and fuzzy feeling after you've finished reading--I'm totally in love with this book!
Must-Read! Check it Out! Don't Bother
Posted by Bookworm at 6:20 PM 3 comments:

Lisa Mantchev's Theatre Illuminata books have always struck me as having the most exquisite covers. What do you think about the cover for the 3rd book, So Silver Bright (coming out September 13th!) I can't wait to see what's next for Bertie & co! 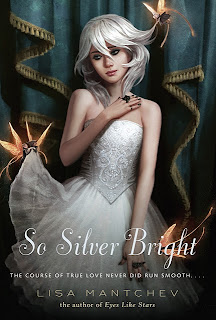 Authors: Emily Franklin & Brendan Halpin
Pages: 229
Published: Walker & Company, 2011
Genre: Contemporary fiction
Cover Score: B+
Overall Grade: B+
Charlie Tracker and Fielding Withers have two jobs. One is to star on their megahit comedy TV show, Jenna and Jonah's How to Be a Rock Star. Their second job is to pretend to be a real-life couple, boosting ratings and attracting show publicity. The downside? Charlie and Fielding can't stand each other. So when a harmful rumor that could potentially ruin their futures and their fauxmance is started by a pesky paparazzo, Charlie and Fielding must go into hiding until the scandal dies down. Far from Hollywood, Charlie and Fielding finally get to know each other away from the chaos and stress of their job, and find that they actually might have a shot at getting along. Or has this fauxmance-gone-wrong ruined their chance for real love?
My thoughts: Jenna and Jonah's Fauxmance as a light, funny, and sincere novel that exceeded my expectations. While I expected the story to be predictable and cheesy, it was witty and had me rooting for the two main characters until the end.
The plot moved fast, and it was easy to follow. My favorite parts? When Fielding and Charlie went into hiding in an isolated beachhouse, and, of course, the Shakespeare festival! I enjoyed how Charlie and Fielding's feelings for each other developed over time in a realistic way, and their banter was sarcastic and amusing, keeping readers entertained throughout the story. I also appreciated all of the "behind the scenes" Hollywood information--the authors clearly either have experience in the industry or did their research.
I only wished that there had been more background information on the characters and their TV show. I felt like Fielding and Charlie lacked depth, and relatability to them was absent until the last few chapters of the book (although I did appreciate the alternating point of view, which helped me see the world through their eyes). As well, I felt like the first three quarters of the book were slow and boring. The story only began to progress when the two main characters headed to Oregon for their "last chance" at the Shakespeare festival--there was simply too much lead-up.
However, the plot evolved from being a romantic, bitingly funny romp into a story about finding the true you, proving yourself, and discovering what you truly want. While it sounds corny, the information and themes were brought up in a way that was interesting, fresh and hilarious.
To fans of Hollywood stories, Jenna and Jonah's Fauxmance was a cute, clever, and easy read that's perfect to bring along with you during spring break!
Must-Read! Check it Out! Don't Bother
Posted by Bookworm at 8:55 PM No comments:

If you haven't already, enter the Ruby Oliver contest here! I'll be giving away 6 copies of the final book in E. Lockhart's charming, hilarious, and romantic series. Enter before tomorrow night at midnight for your chance to win!
Posted by Bookworm at 7:41 PM No comments: