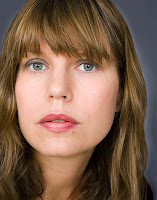 Welcome to E. (which stands for Emily!) Lockhart, the author of the fabulously funny Ruby Oliver series!
---------
Hi--and thanks so much for having me on Bookworm Readers to spread the word about my new book, Real Live Boyfriends. It's book four of the Ruby Oliver novels, the series that started with The Boyfriend List. All the scoop on the book and a preview chapter can be found here.
One of my favorite things to do as a writer is to title chapters. I loved chapter titles as a kid, especially if they were good ones. Reading them let you know what delicious things were in store. I still love them as an adult. Good ones will make me buy a book.

A.A. Milne wrote the most wonderful chapter titles. "In Which Eeyore Loses and Tail and Pooh Finds One." What could be better than that?
In the Ruby stories, I've had a great time playing around with these. In the first book, each chapter was named after a boy on the boyfriend list that ends up ruining Roo's reputation and losing her all her friends. In the second novel, The Boy Book, each chapter is named after a section of the notebook Roo and her friends keep, chock full of spurious advice on "The Care and Ownership of Boobs" or "Why You Want the Guy You Can't Have."

In The Treasure Map of Boys, each chapter is a sentence that begins with "I". "I am a Reluctant Bodyguard". "I Uncover the Secret Mental Health of Hair Bands." And so on.
For the final book, Real Live Boyfriends, I was somewhat stumped for a chapter title gimmick, until a librarian I know only on Twitter said something about how Roo's hysterical tendencies called to mind the hyperbolic headlines of Victorian scandal sheets. Aha! So all the chapter titles in Real Live Boyfriends have exclamation points, as if to evoke "Murder in the Museum Gallery!" or "Adultery on the Upper East Side!" But instead they say things like "Distraction Caused by Bare Chest!" or "Emotional Breakdown in the Parking Lot!"
They were very fun to write.
--------------

In honor of the release of the final book in the Ruby Oliver series, Random House Children's Books is providing me with 6 copies of the concluding novel, Real Live Boyfriends, to give away!
Entering is simple, as always:
1) You must be a follower and you must live in the US (sorry, international friends!)
2) Name and email address below
3) Extra entries can be obtained by blogging/sidebar link (+2 for each mentioned)
Our 6 lucky winners will be chosen on February 14, 2011, so enter now!
Check out Emily's other stops on her tour (you won't regret it--she's quite hilarious):
January 10th: Confessions of a Bookaholic
January 11th: Random Acts of Reading
January 12th: Books on the House
January 13th: Figment
January 14th: Book Butterfly
January 19th: Robin's Roundup
Posted by Bookworm at 12:54 PM

Thank you so much for the giveaway!!! This book looks awesome. And the cover is really nice... all of them.

Have always enjoyed the chapter titles and I am looking forward to the exclamation points.

Great guest blog! I like the cute cover and fun chapter titles.

I love this series. Thanks for the giveaway!

Thanks for the giveaway!
im a follower

I'll admit that I tend to skip over chapter titles. I've just gotten so used to see "Chapter 1", "Chapter 2", that I think every novel is like that. I'll be sure to pay more attention next time :)

I love this series so much! I can't wait to read the next insallment of the crazy love life of Ruby Oliver.

Thanks for the contest!

Thanks!
brnterri at gmail dot com

These books look good! Can't wait to see all those chapter titles and exclamation points! :P

Thanks for the giveaway!

I went through about half the things Ruby did in this series and I have to say, I'm beginning to think someone's following me!