The Clique: It's Not Easy Being Mean 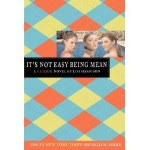 Ehmagawd! The Clique (Massie, Dylan, Alicia, Kristen, and-yes-Claire) is finally back at OCD after a treacherous three weeks of expulsion, and are as fabulous as ever! This time, they're on a quest for a key: not just any key, either. The key that will lead to the famed legendary room of eighth-grade paradise. Current eighth-grade alpha Skye Hamilton is passing down the key now that it's almost the end of the year, and Massie is sure that if the Clique gets the key, they'll keep their alpha positions next year. If only they could find it (supposedly stashed under the bed of one of the Briarwood boys-but who?) before an LBR does, or else it's bye-bye popularity...But what if Claire isn't even there next year to celebrate the room with the rest of her pals (if they ever get the key!)? Yes, after Claire's Hollywood debut in Dial L For Loser, she's on high demand. But if a lead role means giving up her newfound popularity, friends, and super-sweet crush, Cam, she's not sure if she wants to follow her dreams as an actress (especially when it calls for an ah-mazingly ugly makeover!).
The seventh book in the wildly popular Clique series by Lisi Harrison is just as sweet, fresh, fun, and well-written as the previous! I absolutely ah-dore these fabulous summer reads, and girls ages 11 and up will, too.
Posted by Bookworm at 6:19 PM